This post was written by James Davidson, a member of the BuddyPress community and Digital Strategy VP at 7Summits Agency in Milwaukee, WI. 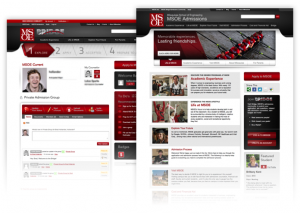 In the spring of 2011, Milwaukee School of Engineering (MSOE) approached 7Summits for some assistance with the University’s social media efforts. Like most of introductory meetings, we didn’t know what to expect; we hoped that they didn’t think we just built Facebook pages. After a brief introduction to 7Summits, we asked MSOE what they wanted to get out the meeting. Their head of Admissions pretty much summed up both their issue and opportunity when he said, “We need to find a way to connect with the Facebook Generation in new media, before we become irrelevant”. This meeting was the beginning of an intensive 6-month project that would see the creation of the first truly social admissions website and integrated community, affectionately called, “Bridge”.

We built MSOE Bridge on WordPress and BuddyPress, and we’ve made a number of enhancements and upgrades since launch; perhaps the coolest feature is the integration work our team did with BuddyPress and MSOE’s existing Admission System of Record/Intake process (Jenzabar ERP). We take a prospective student’s BuddyPress community profile (student record) and link it directly with a custom PHP Application Form we built. From here, we built an integration process that takes the student profile and application form, and bi-directionally sync it with the student record in the ERP. This allows MSOE to correlate how a social interaction in Bridge is driving real measurable business outcomes for MSOE.

Additionally as a prospective student moves through the college admissions process, their status within the community is updated, and customised content such as people (admissions counselors, faculty, current students, etc.) and tasks/to-dos are presented to them right inside BuddyPress.

In 2012, MSOE beat Harvard as one of the Top 10 most innovative solutions with its Bridge community. But apart from the elegance of the technical solution and pleasing user experience, MSOE has wildly increased its admissions to the school. Since revamping its Admissions process with Bridge, the Admissions team has increased its active/enrollment metric by a full one-third increase year over year. The school had the largest open house ever this year and is over 300 applications ahead of where they were last year.

MSOE has always been known for its personalization, but Bridge gives the university a relevant human voice. It reaches them where they are – on Facebook, Twitter — and draws them into a relationship with the school. The community enables the staff to create real connections with other students and demonstrates authentic caring on behalf of the staff before the students ever set foot on campus.

In nearly every metric the university tracks, the social initiative has resulted in game-changing results. In fact, ABET, the accreditation board for the University cited the Bridge community in its annual review. That’s the first time in its century-old history that a non-academic feature of the school was cited as a strength in the board’s report.