The BuddyPress team is thrilled to announce that BuddyPress 2.0 “Juliana” is now available!

This release focuses on administrative tools, performance, and improvements to the activity stream. Let’s take a look at some of the highlights.

If you manage a BuddyPress-powered community, BuddyPress 2.0 is for you. We have built a number of new tools that simplify and centralize common administrative tasks:

The most successful BuddyPress sites are highly dynamic, with a steady stream of new visitors and new content. This dynamic nature means that BuddyPress is a highly database-driven platform, and database performance is often a bottleneck when it comes to scaling BP sites. BuddyPress 2.0 tackles this problem head-on. We’ve streamlined some of the most common problematic queries – such as those in the Members and Activity directories – to shave up to 95% of the query time off of certain individual queries. The sheer number of queries has been dramatically reduced as well, so that single page views access the database up to 50% less than in BP 1.9. And we’ve totally overhauled the way that BuddyPress utilizes advanced caching systems like APC and Memcached, so that users of these systems will see up to 75% fewer cache misses on costly queries.

If you’re a BuddyPress developer or site administrator, you can get more in-depth explanation of changes and an overview of selected benchmarks in this post on bpdevel.wordpress.com. If you are a BuddyPress user, you can just sit back and enjoy the speedier pageloads and reduced server overhead of your BuddyPress 2.0 site!

Spend a lot of time viewing the activity stream? BuddyPress 2.0 automatically lets you know when new items are ready to be loaded. 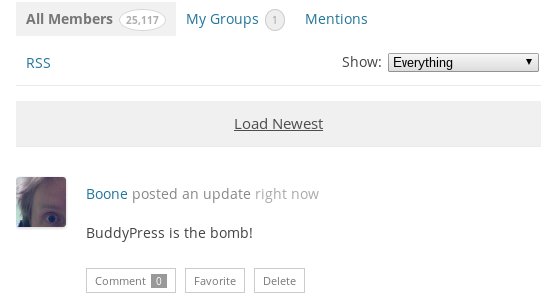 We’ve also reworked the way that phrases like “Boone posted an update” are handled, so that they’re always up-to-date and always translatable.

BuddyPress 2.0 is named for Juliana’s Pizza in Brooklyn, NY. Juliana’s is the second pizza establishment opened in the same location by master pizzaiolo Patsy Grimaldi (it’s a long story), and was also the locale for a serious BuddyPress powwow and up-close dining experience by two members of the core team. For these reasons (not to mention the outstanding pizza) we think that BuddyPress 2.0 “Juliana” has a special ring to it.

Thanks, thanks, and more thanks

BuddyPress is built, with love, by a worldwide network of volunteers. The following people contributed patches during the BuddyPress 2.0 development cycle:

Many thanks to these contributors, and to all who have pitched in the forums and elsewhere.

One final point. Technically, BuddyPress “2.0” is just the version between 1.9 and 2.1. But still, there’s something special about crossing into the 2.x series, especially given the timing: we just crossed 2 million downloads, and it’s been almost exactly five years since BuddyPress 1.0 was released. On behalf of the core team and contributors, I’d like to extend a few special thanks: to founding developer Andy Peatling for getting the ball rolling; to Matt Mullenweg for providing support to the BuddyPress project; and especially to the many thousands of BuddyPress users who have followed and advocated for the project over the years. If BP has done great things for the thousands of communities that depend on it (and I think it has), it’s because of the incredible community around the software itself. A million Two million thanks to all of you.

You can get BuddyPress 2.0 from the wordpress.org plugin repository, or right from your WordPress Dashboard.

As always, questions, comments, bug reports, feature requests, and general laudatory remarks can be directed toward our support forums or our development tracker.