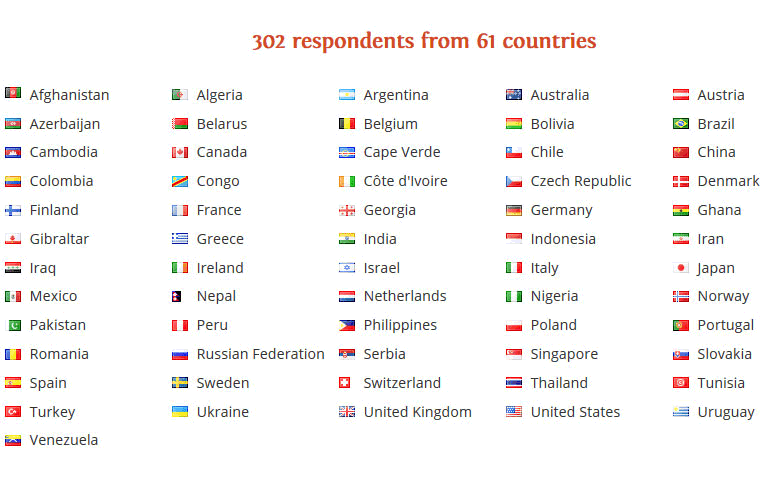 This report presents the results from the 2016 BuddyPress Survey held from November 1 through December 31, 2016. Three hundred and two (302) respondents from 61 countries completed the survey and provided valuable and interesting feedback. Many thanks!

The survey contained 36 questions geared towards Site Builders and WordPress Developers. Adjusting to this more focused target audience compared to previous years’, I selected some questions from our BuddyPress 2013, 2014 and 2015 Surveys, combined/split/modified some of the questions, and added 15 new questions. The survey was designed to maximize responses and get snapshots of:
– basic demographic information
– versions of WordPress, BuddyPress, bbPress, and PHP used
– the types, languages, number of members in BP sites
– comfort levels with BuddyPress, BP theme compatibility, and BP Hooks
– development practices and tools
– respondents willing to share their BP use cases
– BuddyPress participation and contributions
– comments about BuddyPress, BP theme/plugin development, and the survey.

The questionnaire was finalized after incorporating the feedback on the draft from the BP Lead/Core Developers last year. The survey was then promoted via Twitter, BP support forums, bpdevel.wordpress.com, and survey banners added by @johnjamesjacoby at https://buddypress.org and https://codex.buddypress.org which helped a lot.

This section shows some of the highlights from the survey with short comments about each. All supporting graphs, tables, and user comments from this survey are available in the accompanying accessible webpage.

BuddyPress 2.8 requires at least PHP 5.3. It’s encouraging to learn that 99% of respondents’ sites are on PHP version 5.3.x or better. Kudos to the 88% of respondents who are already using PHP 5.6.x or better for their sites.

Providing additional context for the results of this survey, a whopping 45% of respondents have been using BuddyPress for a year or less. Welcome!

The majority of builders/developers (58%) prefer to test their sites, themes, and plugins against BuddyPress stable releases while 27% do so a month after Stable release and 13% test sites at RC 1. Eleven percent (11%) do not test BuddyPress.

The table above is a compilation of the answers to three questions which sought to gauge the users’ confidence or comfort levels with BuddyPress in general, BP Theme Compatibility, and BP Plugin development.

Around a third of BP users extend the following components every time: Members, Extended Profiles, User Groups, and Activity.

Most of the respondents who had up to 500 members are those using BP for 2 years or less, have BP installed in WP domain root, have sites on Shared hosting plans, on PHP 5.6 or better, test against BP Stable release, and on the latest versions of WordPress, BuddyPress, and bbPress.

Expect posts about how site builders or developers are using BuddyPress. Thank you to everyone who signed up!

For the fourth year in a row, “I use BuddyPress in My Own Site” ranks number one (62% in this survey), followed by “I build BuddyPress sites for others” at 37%. One participant commented “Also have a family BuddyPress site on a raspberry pi (in dev).” 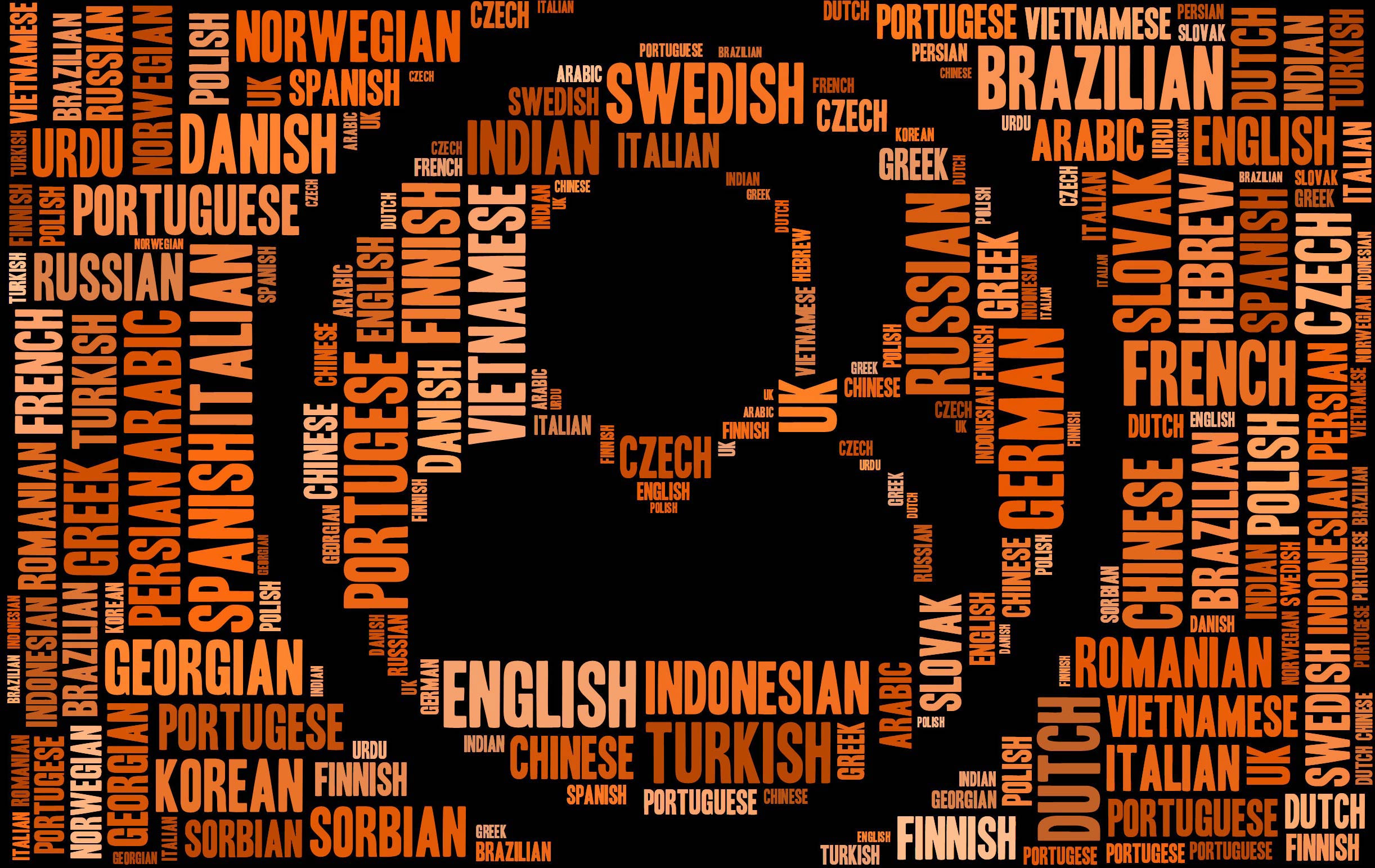 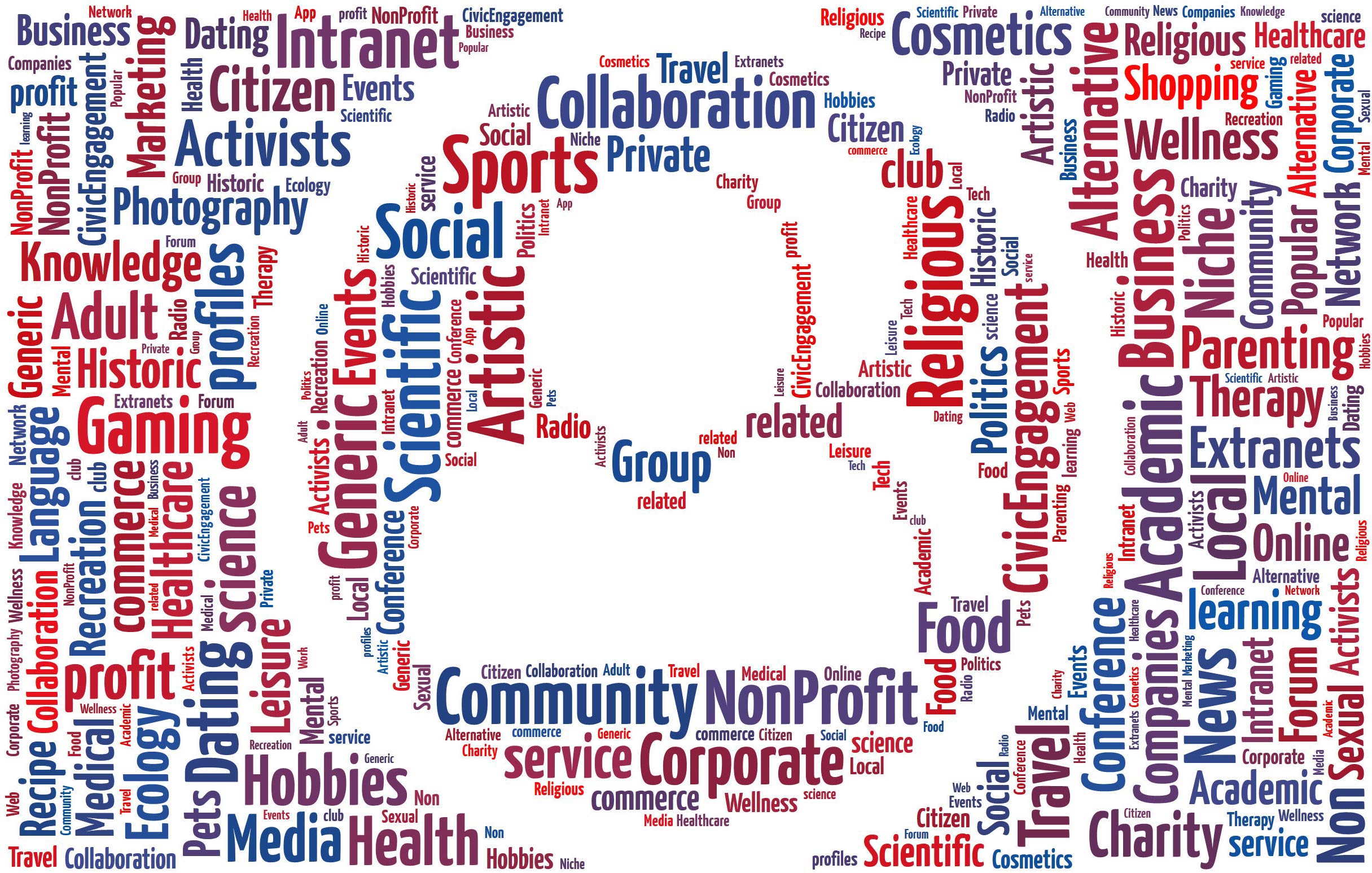 BuddyPress activated in a single WordPress installation continues to be popular with 72% of the respondents in 2016 as it was in the 2013 survey with 75%.

For sites hosted on Shared Hosting plans: half have 500 members or less, 40% of the sites are on single WP in domain root, 47% on PHP 5.6 or better, almost half of the respondents have been using BuddyPress for a year or less, and a little more than a third use BuddyPress for their own sites.

For the third year in a row, most of the users (54% for 2016) shared that they did not evaluate any other networking/membership plugin/software before selecting BuddyPress.

Note: 26% of the 58% who indicated that they have not participated nor contributed to BuddyPress development have also checked that they: helped out in the BP forums, reported bugs at BP Trac, submitted patches at BP Trac, among others.

For the third year in a row, the Sitewide and Group Forums setup is the most popular bbPress configuration at 60%, a big bump from its 49% first place ranking in 2015.

The number of female respondents increased from 8% (17) in 2015 to 13% (37) in this survey. Levels of BuddyPress knowledge range from Beginner through Expert.

The number of respondents increased from 211 from 42 countries in the 2015 survey up to 302 respondents from 61 countries for the 2016 survey. We are grateful to everyone who took the time to take the survey.

BuddyPress will be celebrating the 8th anniversary of the first stable release on April 30, 2017. Thanks to @apeatling and the many contributors who brought that milestone to fruition. Looking at all the major and minor releases through the years led by @johnjamesjacoby, @boonebgorges, and @djpaul, it’s amazing how much has been accomplished by the all-volunteer lead/core developers and contributors.

The lead developers have set the priorities for this year and we look forward to the bp-nouveau template pack and the BP REST API, among many other new features based on some of your comments/requests from this survey.

All are welcome to participate and contribute to the development of BuddyPress. Keep abreast of the latest BuddyPress news at bpdevel.wordpress.com/, buddypress.trac.wordpress.org, Twitter @buddypress @buddypressdev @bptrac, and/or weekly BuddyPress Dev Chats at the #buddypress channel (WP Slack account required).

Finally, all supporting graphs, tables, and comments from this survey are available on the accessible and mobile-friendly BuddyPress 2016 Survey Results webpage. Where possible, data from the 2013, 2014 and 2015 surveys have been added to the charts for comparison. Some data from the older surveys have been recalculated when needed to fit in the format of the question in this survey and noted as such. 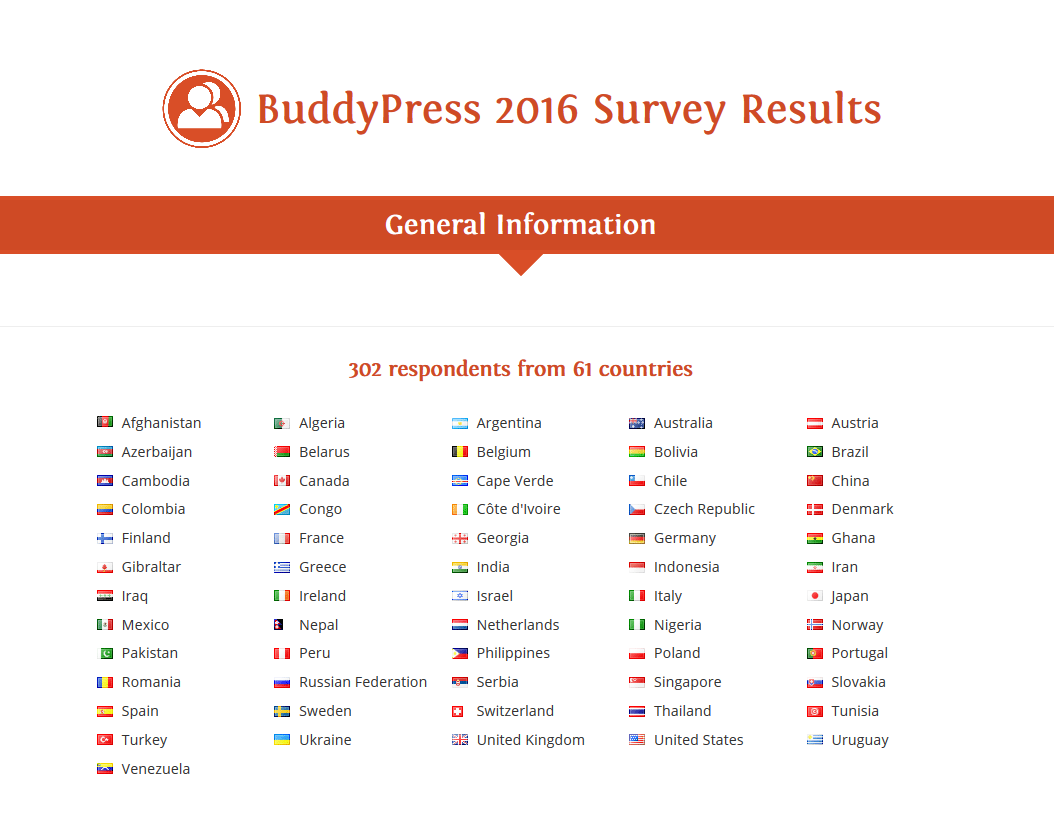